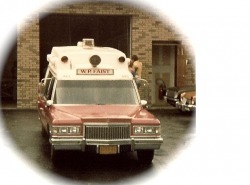 In 1975, Bill and Erna Faist saw the need to improve the ambulance response time to the area formally known as South Spring Valley and felt with the growth of the town it was time for our area to have its own volunteer ambulance service. They named the department in memory of their son whom they had lost to an automobile accident  They formed a group of 6 community minded residents who started the process of obtaining a certification from New York State to run an ambulance, seting up boundaries, and recruiting members.

As they first started, the department did not have a home, so they held their meetings in such places as people's homes, in local schools, at the local power company’s building, and in theHugh Gassner Firehouse.  Then they started sending out notices to the community concerning the needs for manpower and funds.  As the membership started to grow training as EMT’s began, and the neighboring corps allowed our members to ride on their ambulances to get their feet wet. The first ambulance was bought used from Nanuet Volunteer Ambulance Corps, and was kept in the driveway of Bill and Erna Faist's home on Chestnut Ridge Road.

By the beginning of 1977 they were well on their way but there was still work to be done. They were still working out their dispatch systems, communications with local police and hospitals. On July 1, 1977, after almost three years of very hard work, their dream finally came true: The William P. Faist Volunteer Ambulance Corps went into service for the first time. 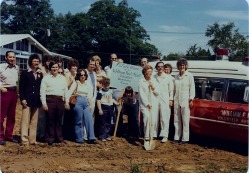 Early in 1977, the Town of Ramapo had turned over a small piece of property to the corps for the purpose of building a headquarters. On June 12, a groundbreaking ceremony took place, but it would be more then two years before we could call it home.  Bill Faist oversaw the project of building our headquarters. While materials and specialized labor were either donated or provided at minimal cost, the membership, in addition to being EMT's, had to become carpenters, masons, and electricians in order to get the headquarters built. By winter of 1979, the building was not yet complete, but there was enough progress that they could occupy the still-unfinshed building.

Over the years, the William P. Faist Ambulance Corps has continued to grow as has the community it services.  We occupied that small building that we moved into in 1979 until February 2018 when we moved into our new facuilty on the joining property and we continue to need more volunteers to keep serving our community.